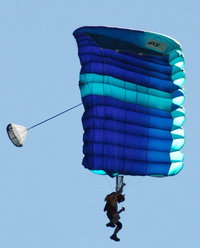 On the evening of August 19, 2010, Ammon McNeely was TASERED (which could be lethal), arrested, and thrown in jail for BASE jumping in Yosemite National Park. This has gone too far. Times have changed. It’s time to legalize BASE jumping.

What’s the difference between hurling oneself from a cliff using a hang glider or a parachute? Absolutely nothing, except the law against one and not the other.

Read more about the history of how BASE became banned in our national parks here.

Read BASE 38, retired US State’s Attorney, Rick Harrison’s thoughts on the subject from our 2009 interview here.

Europeon nations such as Norway and Switzerland have long ago embraced BASE jumping as a sport and welcome enthusiasts as openly among various sports adventurers.

Times have changed, our freedoms are being infringed upon at an alarming rate by our own government as it grows larger and larger.  Legalizing BASE jumping in our National Parks might seem trivial compared to other infringements into our lives, however to those involved in the sport it’s a glaring injustice in the land of the free, home of the brave.

Base jumping is not going away, the law needs too.  It places the rangers in a unfair situation of enforcing an outdated law created with an outdated mentality.

PS) August 29, 2010
A big thank you to my non-BASE jumping friends who joined the Free Ammon McNeely Facebook support group, pass the link along. It’s time for the government to remove outdated laws & mentalities, and thug like enforcement of said laws which are not protecting society as a whole, but hindering our personal freedoms.

This entry was posted in BASE Jumping. Bookmark the permalink.

One response to “Free Ammon McNeely…Free Our US National Parks”