Chris ‘douggs’ Mcdougall will be conducting a First Jump Course at the Perrine Memorial Bridge, aka The Potato Bridge, in Idaho, May 7th-May 17th, 2013.

If you have completed 200 skydives, have your own rig, and read/studied The Great Book of BASE; You can contact Chris via douggs@basedreams.com to discuss your qualifications and registration process and fees.

Please share this information with those you feel would benefit from this opportunity. Thank you.

For once you have tasted flight you will walk the earth with your eyes turned skywards, for there you have been and there you will long to return.
Leonardo da Vinci

Posted in BASE Jumping

From the laptop of the lovely and talented Kolla of Blue Skies Magazine.

Left. Left. Left right left. Issue numero 34 in being shipped out now! If you do not have your Issue #34 (August) magazine by August 23, please contact Kolla@blueskiesmag.com.

If you’re not a subscriber, you won’t get a magazine. You’ll just get this, a description of what could be, if you only subscribed. You can fix that by clicking over to blueskiesmag.com/subscribe.

Life on the Edge with Chris ‘douggs’ McDougall 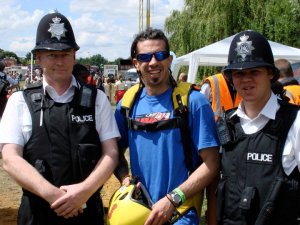 On May 21, 2010 I conducted an Internet radio show interview with 34 year old, Australian  Adventurer, Chris ‘douggs’ McDougall.  Normally I would have done the standard question and answer interview via emails, telephone calls and instant messenger, however nothing about the professional Base jumper nicknamed, ‘douggs’ follows “the norm” as I learned quickly.

I had exchanged emails with him before Bridge Day 2009 where he agreed to the interviewed.  I told him to let me read his book first as I really knew nothing about him and then we could work on the interview.  He agreed and I honestly figured by the time the book arrived from South Africa, 3 months later, that I wouldn’t be able to pin him down for an interview.  I was wrong.

Sticking to his word, we chatted a couple of times via Skype while he worked and lived on a ship offshore in the oil drilling industry.  It was during one of those late night chats where I naively suggested, “hey we should do a radio show interview”.  Little did I realize that he would agree to it and the next day I wanted to scrap the notion.   Months passed and the day arrived that I received an email saying he was heading to the states before leaving for an expedition to Baffin Island, “let’s do the interview mate”. He uses the words “mate and buddy” a lot, along with “hugs and cheers”.  Chris has a natural friendliness to his demeanor even when it’s being transmitted through cyberspace, it is one of the first things you notice.  His book could easily be titled, “Confessions of a really humble and sincerely nice person”.  As it turned out our schedules didn’t mesh and I had to ask him if we could postpone the interview until he returned from Baffin Island.  His reply as is so often the case, “No worries mate, it will be fun and I’ll have my trip to chat about.”  If ever I met a person who could take a negative and turn it into a positive, it is he.  Life has given him lots of practice at this and let him with the ability to share this trait with others.

Finally after 8 months, I scheduled airtime and the rock star of all BASE jumpers, Chris McDougall, called into the show from Switzerland.  I was so nervous before going on air, I confided in him that I thought I might vomit.  He shot back, “no worries mate”.  We taped the show live, with me attempting to speak, read the screen and type simultaneously and he hitting every question out of the park with his answers.  Fielding my questions along with the those posted by listeners in the shows chat room McDougall showcased himself as a true professional and ambassador of the sport.

He offered his opinions on: You Tube videos, new jumpers to the sport, where he sees the sport of BASE heading in the next 10 years, what it was like to write a book for mass consumption, his favorite BASE jump, on dialing it back as a jumper, Baffin Island, what it’s like to work a “regular job”, receiving hate mail, having his book banned and why he wouldn’t want to be a father while still an active BASE jumper, among other topics.

The interview is available for download or play in its entirety at: Chris ‘douggs’ McDougall A must listen for anyone contemplating entering the sport of BASE jumping.  His comprehension of himself and relationship to BASE jumping is undeniably impressive.

Mr. McDougall may seem to be a bit outside the norm to the masses and for that I say “hallelujah”.  I will never know the feeling of standing with my toes on the edge, free-falling or flying through the air, but through his kindness and shinning spirit he held my hand and walked me to a different fears edge.  The connectivity he shares with nature, his family, friends and the no holds bar passion for life in its simplest terms is what makes him “no idiot” and a stellar example of what being a rock star of a human being is all about.

**My sincere thanks to Chris ‘douggs’ McDougall for his unwavering support and encouragement.   Also to Dan, Bryn, Joseph, Paul, Princess Amanda, Icasrus, Rigger Lee, Mac, Hookitt, Lonnie and Rick and Joy Harrison for tuning in.**

Posted in BASE Jumping